Where & When to Vote 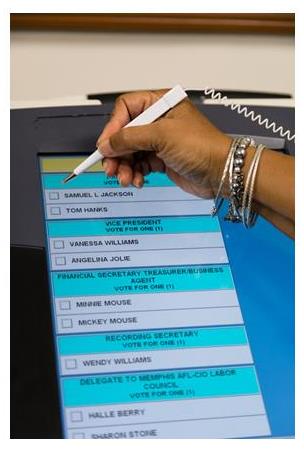 Unlike some states, voters in Tennessee do not select a party when they register to vote. This is known as an open primary.  An open primary is a primary election in which a voter does not formally affiliate with a political party in order to vote in its primary. They simply declare their affiliation with a party at the polls.

When you arrive at the polls, you will need to show the poll worker a photo ID.  The worker will check you in.  If it is a primary election, they will ask you what party you have selected.  Then a ballot application will print and a voter access card will be created.  You will sign the ballot application and take it and the access card to the machine area.

Another poll worker will collect your ballot application.  You will sign the signature list and you will be directed to a machine.

Insert your ballot access card into the voting machine and follow directions on the screen.  Vote for the candidates of your choice.  If you don’t want to vote in a particular race, skip it.

When you are finished, a summary page will come up.  Review your choices.  If you are happy with your choices, then press the “Cast Ballot” button.  The voter access card will pop out.  Take the card to the next poll worker.  They will take the card and give you a “I Voted” sticker.

If You Need Assistance

You may be assisted by anyone you choose except a candidate.  If you ask for assistance from a poll worker, workers from both parties will help.  If you have any questions, please ask a poll worker for help before you push the “Cast Ballot” button.  Once you have pushed that button, you have voted and no changes can be made.